COMMUNICATION TIPS TO TRY WITH YOUR PARTNER 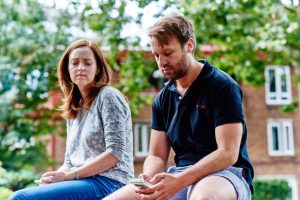 And while there’s no single, simple solution for making this happen, there are a few key communication tips that can help both with difficult conversations and good communication on a day-to-day basis.

Don’t sweep things under the carpet

Our first tip on talking is simply: try it! It can be really tempting to avoid difficult conversations to keep the peace or because you’re worried you’re being silly. But the risk with this is that you keep putting off talking about things until you finally snap because the tension has been building over time.

It’s better to get little things out in the open and do this regularly rather than having big rows that risk causing damage to your relationship. Of course, that doesn’t mean taking your partner to task over every little thing – it will always be important to be able to let the little stuff go – but if there are things that seem to keep bothering you over and over, it’s better to discuss them than keep them bottled up.

Don’t put them on the defensive

It’s so easy to react to a disagreement with your partner by telling them everything you think they’re doing wrong and making lots of accusations. But the problem with this is that it’s only likely to put them on the defensive.

In counselling, we often recommend that people try using ‘I’ statements. This means talking primarily in terms of how things have made you feel. Although it can feel a little clinical, you might like to try saying: ‘when you do x, it makes me feel y’.

Putting the focus on yourself like this means taking responsibility for your feelings and is much less likely to make your partner feel attacked. It’s a simple change, but one that can really shift the tone of a disagreement and make it less likely to spin out of control.

Pick a place and time

It’s not just about what you say and how you say it, but also where and when. Sometimes, it’s useful to plan to have a discussion at a specific time and place.

There are a few benefits to this. When you set time aside, it means you’re able to give the conversation your full attention and aren’t trying to fit it in before doing something else like going out or going to bed. If you were trying to have an important business meeting, you wouldn’t usually try to fit it in while walking down the corridor, so why do we so often do the same with our relationships?

Also, changing location can mean changing your thinking. If you’ve been arguing a lot at home, you might associate the space with the same patterns. Going somewhere else, or even doing something else while you talk, such as driving or walking, can help shift you into a different mindset.

Make time to talk and listen

We tend to assume that communication is all about making yourself heard but this is really only half of it. It’s also just as important that you’re hearing each other.

Lots of the time when we’re having a discussion, we’re just waiting for our turn to talk. We’re hearing what they’re saying, but we’re concentrating our response: ‘that’s not true, that’s really annoying me’. This is understandable: no-one loves hearing something they disagree with. But in order to truly understand your partner’s perspective, you really have to pay attention and take it in.

You may find it useful to use the following simple pattern: one person talks, the other listens and then paraphrases back what they said: ‘what it sounds like you’re saying is…’. And then switch. Again, it sounds a little clinical, but repeating back what your partner has said can be a really powerful technique. It both shows them you’re trying to understand what’s they’re saying and actually makes it much easier to do this – just as it’s easier to memorize a fact by stating it out loud.

This isn’t necessary about agreeing with each other. It’s about understanding one another so you can begin to move towards a solution. If you’re always bearing this in mind as a goal then you’re much less likely to find yourself arguing.

Our final tip is to remember that communication is a skill and it takes practice to get good at it. If you want to develop your ability to communicate as a couple, you’ll need to build positive habits into the way you talk and make a real effort to stick to them.

Some days you’ll be better than others, and some days you won’t manage it at all. But if you persevere, you will find that, over time, your ability to say what’s on your mind and listen when your partner tells you what’s on theirs, does get better.

How we can help

If you would like to try these exercises with your partner, but you’re worried that it might make things worse, don’t worry,  you might just need a little help to get you back on the right track. contact us today to arrange an appointment.

Please press enter to add a product to your cart Dismiss